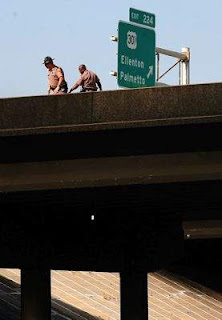 MANATEE COUNTY — A Cape Coral girl died Wednesday after being thrown from a sport utility vehicle on an Interstate 75 overpass and plummeting over a guard rail onto U.S. 301 below, according to a Florida Highway Patrol report.

The young girl died after being airlifted to Bayfront Medical Center in St. Petersburg in critical condition. She was riding in the third row of a 2003 Ford Expedition headed north on I-75 at about 8 a.m., when a tire on the vehicle separated. The SUV spun around and slammed into a concrete guardrail at the U.S. 301 overpass. She was lying in the seat and not wearing a seat belt, careened through the back window. The young girl and the window sailed over the edge of the guardrail and fell dozens of feet landing in the northbound lanes of U.S. 301 below. She was the only person in the vehicle that was not wearing a seatbelt.

Troopers said the crash was still under investigation, and no charges have been filed. In Florida, the driver of a vehicle can be held responsible for minors not wearing seat belts, Trooper Miller said. The crash occurred at the same place a tanker overturned over the guardrail in 2008 and exploded after smashing onto U.S. 301.