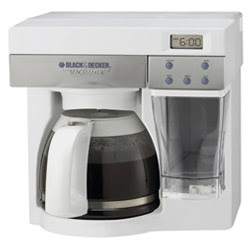 According the Consumer Product Safety Commission, the Black and Decker Spacemaker coffee makers were sold nationwide at major retailers, including Kmart, Target, Wal-Mart and Bed Bath & Beyond, and online at Amazon.com from March 2006 through March 2009 for between $60 and $70.

The affected appliances, distributed through Applica Consumer Products Inc., had brew baskets that could shift out of alignment, causing heated water to overflow. There were 10 reports of consumers receiving second-degree burns, the commission said.

Four model numbers have been recalled: ODC440, ODC440B, ODC450 and ODC460. They mount under a cabinet, and have either a 12-cup glass carafe or an 8-cup thermal carafe.

The commission said consumers should stop using the coffee makers immediately and contact Applica for free replacement baskets. CPSC is still interested in receiving incident or injury reports that are either directly related to this product recall or involve a different hazard with the same product. Learn more here: NBCDFW.com