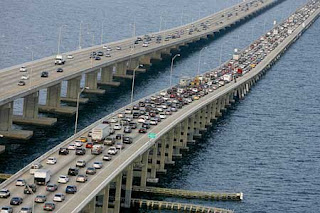 TAMPA — Slick rain-soaked roads this morning turned the Howard Frankland Bridge into a traffic-laden mess, with accident after accident piling up along the roadway.

A camper that was being towed detached from the vehicle in the northbound lanes of Interstate 275 near the Kennedy Boulevard. Several lanes are blocked according to witnesses.

The FHP also reports a third car crash on southbound Interstate 275 at the Gandy Boulevard ramp. There is no lanes block in this incident.