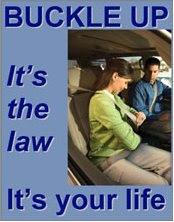 The Florida Senate has recently passed a measure that toughens the state’s seat belt law. The Senate voted 33-4 and the House passed the bill (SB 344) with a 95-20 vote to allow police officers to pull over drivers who fail to buckle up. Gov. Charlie Crist indicated he was ready to sign it into law. The Safety Belt Law was named in memory of Dori Slosberg and Katie Marchetti, two young women killed in accidents. Katie, 16, was heading home from Sarasota when a crash outside Sun City Center caused her to be thrown from the vehicle and into the middle of Interstate 75, where she was hit by an oncoming vehicle. Dori, 14, was one of five teens killed 13 years ago in a 1996 crash. Those wearing seat belts survived.

The National Highway Traffic Safety Administration statistics that show Florida would save an estimated 124 lives, avoid 1,733 serious injuries and save $408 million a year.

Florida Injury Attorney G. Alan Tripp, Jr., encourages drivers and passengers alike to “buckle up for safety, buckle up!” If you or a loved one has been injured in an accident, call the TRIPP LAW FIRM – Personal Injury Law for a FREE immediate telephone consultation.