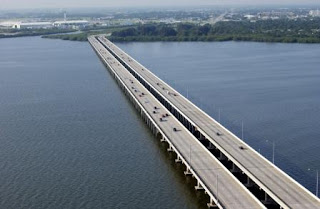 PINELLAS COUNTY – Five people were injured when four motorcycles traveling at high speed across the Bayside Bridge got into a chain-reaction crash late Saturday night.

All were wearing helmets and the FHP said alcohol was not a factor.

According to the report, at about 10:55 p.m., the four motorcycles were heading south on the bridge at high speed when one biker started slowing. Another biker following could not stop in time and hit the back of the slowing 2008 Suzuki motorcycle, throwing the driver and his passenger to the pavement. Another biker following these two that had already crashed couldn’t stop and ran into one of the two crashing motorcycles, followed another that piled up too.

The wreck closed the southbound lanes of Bayside Bridge for more than two hours. All lanes were open by 1:15 a.m. No charges have been filed but the accident remains under investigation by the FHP.